This is a protein bio-film, probably triggered by hi organic levels, poor circulation and low CO2 levels.
Neuston organisms readily develop in it (or underneath it), like bacteria/zoo-spores/protozoans, hydras, worms even small snails.
This scum is very compact and often green. It is impossible to break it with the finger. I have tried it, and the film just grows back together in a second. Visually it appears "oily".
I have removed the film by using paper kitchen towels, laying them over the surface many times, until the scum was gone. After that I have performed a huge 80% water change, rinsed the filter media very well (that in fact was dirty) and have introduced one extra filter pump (extra circulation and surface agitation).
Also, I started using Easy Carbo (like Excel) instead of the CO2.
Everything seems to be in order now.
One more thing, I didn't prune plants in a long time so they covered the entire surface. And because of that, the tank circulation was poor, causing probably lower O2 levels as well. All this induced the surface scum.

There is another type of surface film caused by the Eisenbacteria (Iron bacteria). This film appears to be whitish, much thinner and breaks easily on touch. Improving surface agitation will help in combating this kind of film. 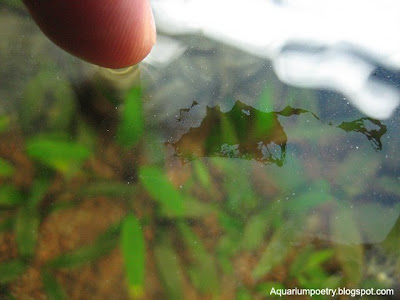 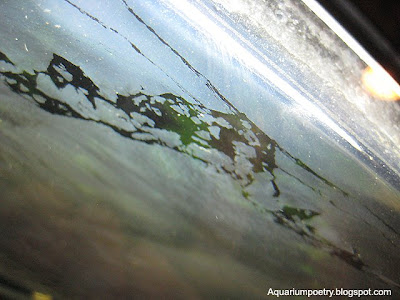 Observation;
I have fixed this surface film (white and green) in 3 different tanks by simply introducing an air pump or aplying the venturi air diffuser to the power head (without removing it the film would disapear by the next day). The air bubbles seem to be breaking the surface tension causing the surface film to break into tiny particles which sink to the bottom or get trapped in the filter (in both ways bacteria will break them down). 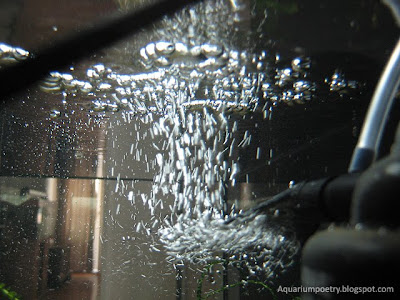